George Henry Borrow arrived in the Spanish capital one cold January morning in 1836. When he left for the last time four years later he had enough adventure stories to write a book. THE BIBLE IN SPAIN became an instant best seller when it was first published in 1843. Borrow used Madrid as his base during his stay working for the British & Foreign Bible Society, and so much remains from his day that we are able to explore the quarters of the old part of the city that he knew so well. 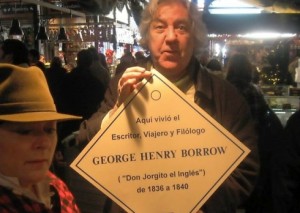 We follow in his footsteps on that memorable morning in May, 1838, when he went on the run to escape the law authorities who had been ordered to arrest the “Heretic” on the orders of the Primate of All Spain! Lunch is optional, in a 18th century tavern he knew quite well.

“Quite staggering the knowledge you have of Borrow’s Madrid, and you aren’t even a member of the Borrow Society!” President of the George Borrow Society