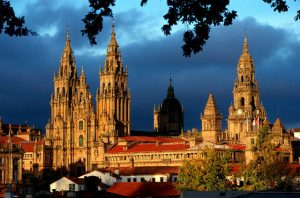 This ancient university city of Salamanca lies close to the Portuguese border but now with new highways it can be reached from Madrid by luxury express bus in just two hours & thirty minutes. It simply oozes history from Hannibal in 3BC to Romans; then Moors and in 1085 Christian rule under Alfonso VI.

The Society´s tour starts in the most impressive Plaza Mayor in all of Spain (yes, even better than Madrid´s!) at the medallion bust of the most famous of all Spanish warriors, El Cid. You learn of monarchs from the Hapsburgs to the Bourbons, as all are featured around the plaza. There is one of Lord Wellington to commemorate his liberating the great seat of learning after 4 years of French occupation. Even the late dictator, Generalisimo Franco, is featured. 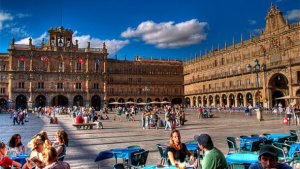 plaza we take a singular route by the 16th century Palace of Monterrey, considered one of the finest in Spain. We stand in front of the aptly named ´Death’s Head House´ before a visit to the more peaceful confines of a convent to see one of the most beautiful funeral monuments of the Spanish Renaissance.

So on through winding cobbled streets exploring nooks and crannies; stopping for refreshments at our favourite haunts with centuries old timber beams and log fires. 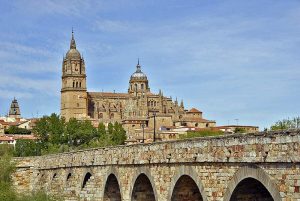 As Salamanca boasts two cathedrals and we visit both; first the oldest dating from 1150 with all its wonderful chapels and then the striking, so called ´New Cathedral´ which is only 500 years old! Standing outside the university entrance (founded in 1218) people gather and point at the Platersque facade looking for the elusive ´frog´….quite a landmark if the tourist shops are anything to go by! It is lost in time but legend has it that if you can find it you have years of romance and if you tell others where it is then the opposite will happen. You have been warned!.

Our tour finishes with a stroll down to the Roman bridge over the River Tormes with its peaceful setting. We then go to a friend´s restaurant for lunch.

Please use the reservation form to contact us for pricing

CLICK HERE TO LEARN HOW TO RESERVE YOUR TOUR​

Transport, museum fees, and the Chairman as your guide.
All tours include Wellington Society of Madrid membership